Every now and then, we all need a break from the monotony of life. I’m pretty sure this goes without saying, but I feel like I should still provide some sort of disclaimer: The following post should probably not be taken too seriously…although the evidence is completely real. You call it “strange”? We call it sibling bonding.

You guys, I’m pretty sure there are sasquatch (sasquatches? sasquatchi?) living behind my house. That may seem a little bizarre, but hear me out: I have evidence. Photographed proof. I mean, no, I don’t have a picture of an actual sasquatch, because if they were that easy to spot, you wouldn’t be rolling your eyes right now. The proof I have might actually be better. Stay tuned.

You know how there are trends in literature/movies/etc? For example, we went through a wizard phase, a vampire phase, and now a zombie phase. I’ve heard people speculate that mermaids might be the next big thing. False. You know what’s really the next big thing? Sasquatch.

For every huge movement in pop culture, there must be a pioneer: one who blazes the trail so other people can rip-off their idea and wear it out and make it annoying. Let me tell you this: you could be that pioneer! Start writing your story about a sasquatch who is found in the woods in Small Town, USA, and BOOM! NYT Bestseller. Just remember to thank me when you’re drinking venti iced vanilla lattes by the pool at your California beach home.

A few weeks ago, one of my friends (yes, I really do have more than one) told me about this new idea she had for a story. It had a really exciting and unique plot, but she couldn’t figure out one major detail. I suggested adding a sasquatch. She’s still thinking on it.

Why do I think sasquatch (Google told me the plural form is the same as the singular form, like the word fish) are the next big thing? Because I’ve found some. No, I’m not claiming to have located Big Foot. Don’t be silly. What I am claiming, though, is that I’m pretty sure some are living less than two acres away from me.

And while the rest of you are out there being productive members of society boring, my sister and I are about to change the world.

So to all of you naysayers who say, “She seriously needs to switch to decaf,” or “She’s weird,” or “She needs more fresh air,” I have this to say: I’ve been taking vitamins faithfully for the past several weeks so I can be at the top of my game for end of semester busyness. I’ve never been healthier. Your arguments are invalid.

So, without further ado, buckle your seat belts and hang on to your sanity…

There used to be woods on the lot behind our backyard, but one day someone started clearing them out, leaving a nice little field in place of the trees and underbrush. Well, several weeks ago, my sister Abby and I started noticing something really strange. Giant structures resembling beaver dams started appearing. For years, we’ve known something strange has lived in the lot behind our house. We just didn’t know what it was. But after seeing these structures–these rudimentary dwelling places large enough to house a six foot tall walking hairball—we knew. There’s a squatch in them woods.

Sunday after church, Abby and I braved up enough to take some pictures. We got into my car (camouflaged by pollen) and drove to the back of our property. We parked far enough away that the sasquatch couldn’t hear us coming, but close enough that we could retreat if needed. We by no means claim to be expert sasquatch hunters, so the fact that we both happened to be wearing bright pink is irrelevant.

The following, unedited photographs are shots of these structures. We’re calling them squatch mounds:

A clear view of Mound A and Mound B taken from the other side of our fence. Notice the suspiciously-bent fence in front of Mound A.

A zoomed-in image of the two mounds. We speculate a pair of squatch may have taken up residence.

A shot of me and Mound A for scale.

A close-up of Mound B. 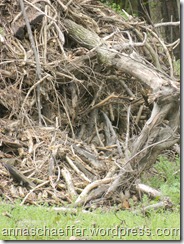 The entrance to Mound B. 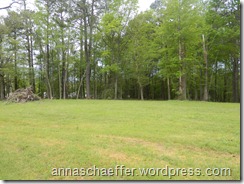 A view of the field, with Mound B visible on the left. Notice the woods into which the sasquatch retreat during the day.

My sister Abby got distracted by a shard of glass she found. So she’s all like, “Take a picture of me with this shard!” And I’m all like, “Fine.” Notice Mound B in the background. Also, she wanted me to inform you that this is not her regular smile. Okay, moving on now…

Still skeptical? Thinking our neighbors may just be gathering debris to burn in a bonfire? Think again, folks. We’ve got more proof:

Notice the hole in the fence. It is in the precise shape a large foot would make if something heavy (and hairy???)  were to climb over the fence. It appears the squatch have been visiting our backyard under the cover of night. Creepy.

The squatch have been stripping bark off of the trees. We speculate they may use the bark for a variety of reasons, including kindling, building materials, and fiber supplements.

So there you have it. If that’s not enough evidence for you, then I don’t know what is. The squatch in the woods explain many mysteries that have gone unsolved over the years. For example, we used to have chickens. Each afternoon, they would wander around in a cute little flock, pecking and clucking and occasionally chasing us with the intent to kill. Nothing ever bothered them, until one day when they started disappearing, one by one. At first, we assumed hawks were taking them, but some of them were too large even for hawks to carry. Plus, there were no feathers left behind, like they were so overpowered they couldn’t even put up a fight. One time, something ripped the chicken wire on their coop. We assumed a raccoon or something had broken in, but now we’re pretty sure a squatch tore open the wire, reached in, and got himself a nugget.

Abby and I are thinking the neighbors will set the squatch mounds on fire once they realize what’s going on, in which case, we will be armed and ready with our camera. Surely there’s only so much stopping, dropping, and rolling can do for a beast that’s covered in hair, so our bet is they’ll take off in the direction of a pond down the road.

But in the meantime, we’re calling this movement Squatch Watch 2013. We’re accepting people to become members of the official Squatch Squad, so if you’re interested, let us know. They’re obviously an endangered species, but as we’ve seen, sasquatch can be anywhere. And no, we’re not affiliated with any people that may happen to go by the same name. There are some strange people out there.

So the next time something just doesn’t seem quite right in your backyard, you might want to investigate. But remember to always use the buddy system. The squatch could be anywhere.

We’ll keep you updated on any new developments in Squatch Watch 2013. Stay safe, and be sure to snap a picture the next time you see a suspicious looking giant mound. There just might be a squatch in them woods.

4 thoughts on “Sasquatch in the Woods”