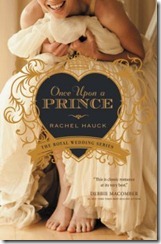 Susanna Truitt spent the past twelve years of her life waiting for the day Adam Peters would ask her to marry him. But then he breaks up with her on a stormy day on St. Simons Island, GA, claiming he’s “found the right ring but not the right girl.” Now Susanna has to learn to live without the plans she’s been making for more than a decade. And then she meets Nate, a European guy vacationing in St. Simons Island who she keeps running into. Nate has a history of his own, though. A royal history, complete with plans to become king of his home country…and a requirement that he marry a woman also born of noble blood. Why would God allow Susanna and Prince Nathaniel to fall in love if they can never be together? Could He have a noble purpose and a “happily ever after” in store for a Southern girl and a royal heir?

Once Upon a Prince is a present-day fairy tale. Combine that knowledge with the title and cover of the book, and you might be confident in your prediction of how it ends. But I love a good fairy tale, and this is certainly a good one, complete with twists, turns, and unpredictable situations. The story alternates between the perspective of Susanna and Prince Nathaniel. Being from the South, I could identify a lot with Susanna’s world and easily see things through her eyes. That was even more interesting when I got to see how she sees royalty and all of the customs and privileges that come with it. I felt for Susanna throughout the different trials she faces, and I enjoyed Nathaniel’s perspective, too. Her side of the story is that of a “commoner,” while his side is official, prestigious, and…well, royal. It’s definitely a fun contrast.

The novel opens with Adam breaking up with Susanna. While I’m not sure how many pages this scene actually was (I read it on my Kindle, and I like to customize my font size), it lasts for a long time. Since the story doesn’t revolve around Adam and Susanna’s relationship, I thought all of this background info could’ve been condensed a little. Likewise, some conversational scenes were lengthy, but there were always lots of details to hold my interest.

The story is both serious and light-hearted. While reading this book, one minute I’d be saying, “Awww!” and the next minute I’d be laughing out loud. The interactions between characters are always entertaining, and each has a unique voice. Especially Avery, Susanna’s hilarious younger sister.

As a little girl, I dreamed of being a princess. I dreamed of castles and fancy ball gowns and Prince Charming. Actually, those things are still fun to daydream about. And that’s why Rachel Hauck’s newest book is such a fun read. It’s light enough that you can pick it up, read a few pages, then come back to it later. But it also weaves an endearing story about two characters you won’t want to leave.

Rachel Hauck is a master at crafting Christian romantic comedy novels filled with clean, uplifting content. I’m looking forward to the next book in the Royal Wedding series!

From the Back Cover:

Once Upon a Prince, the first novel in the Royal Wedding series by bestselling author Rachel Hauck, treats you to a modern-day fairy tale.

Susanna Truitt never dreamed of a great romance or being treated like a princess—just to marry the man she has loved for twelve years. But life isn’t going according to plan. When her high-school-sweetheart-turned-Marine-officer breaks up instead of proposing, Susanna scrambles to rebuild her life.

The last thing Prince Nathaniel expects to find on his American holiday to St. Simon’s Island is the queen of his heart. A prince has duties, and his family’s tense political situation has chosen his bride for him. When Prince Nathaniel comes to Susanna’s aid under the fabled Lover’s Oak, he is blindsided by love.

Their lives are worlds apart. He’s a royal prince. She’s an ordinary girl. But everything changes when Susanna receives an invitation to Nathaniel’s coronation.

RITA finalist and Carol Award winner Rahcel Hauck was recently chosen by Family Fiction readers as one of the top five romance authors in CBA. She has written more than 15 novels. Rachel lives in central Florida with her husband and writes from her ivory tower (her 14th floor office painted ivory!).

Buy the Book (available in print and ebook formats):

Disclosure of Material Connection: I received this book free from the publisher through the BookSneeze®.com http://BookSneeze®.com book review bloggers program. I was not required to write a positive review. The opinions I have expressed are my own. I am disclosing this in accordance with the Federal Trade Commission’s 16 CFR, Part 255 http://www.access.gpo.gov/nara/cfr/waisidx_03/16cfr255_03.html : “Guides Concerning the Use of Endorsements and Testimonials in Advertising.”