It’s finally here! The cover for Just One Thing!

Can I admit something to you? This book almost didn’t exist. For starters, I didn’t originally plan on writing a sequel to All of This…but then, before AoT was even published, my dear friend Em and I took a trip to Seattle. I outlined Just One Thing on the flight home.

That was five years ago.

All of This released in July 2015. In August 2015, I moved away from home to go to graduate school in North Carolina. Turns out, a master’s degree kinda eats up your free time, so I paused the new book.

In May 2018, I graduated with my MA, began a full-time job, and dusted the cobwebs off of the story. I tweaked the plot, strengthened the characters, and poured stuff I’d learned during grad school into the manuscript.

I also made sure it could stand alone as its own story. So although it’s technically a sequel, you don’t have to know All of This in order to step into Sadie’s world through Just One Thing.

Today, in July 2019, we’re weeks away from the release of Just One Thing. In fact, as I write this, the manuscript is with my designer, getting the pretty chapter headings and everything all in place. It’s almost here.

But for now, I’d like to show you the cover, designed by the amazing Roseanna White. I’ll also share the synopsis.

Please feel free to share about the book – that will help out a lot!

Thank you for reading, friends!

P.S. The most popular question I’ve gotten from readers since All of This released is: “Does Sadie stay in Pecan Creek or go back to Seattle?”

And now, allow me to introduce you to Just One Thing… 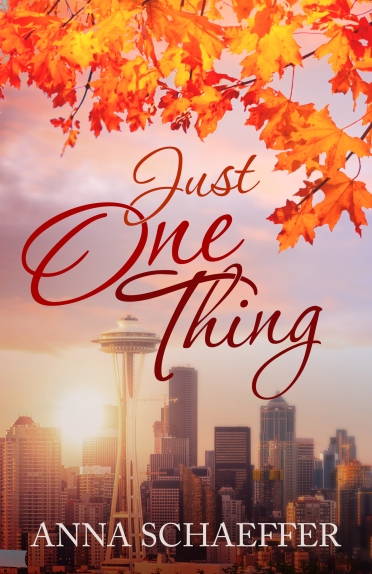 Sadie Franklin wants to move on, but first she must return to everything she wants to forget.

Senior year in Seattle is the perfect chance for a former party girl to start over, right? All she has to do is build a relationship with her detached father, make decent grades, and avoid her ex-friends. Oh, and convince everyone she really has changed. Easy peasy.

The first chance she gets, she wants to hop on the next flight back to Pecan Creek, Georgia. Although the tea there is sweet enough to give her cavities, at least the people love her and believe she has a purpose bigger than her painful past.

Sadie meets a new friend looking for her own fresh start, who shows Sadie the value of true friendship and reminds her there’s always more to a person’s story than what’s on display.

But figuring out the next step is messy, and it’s hard to change a reputation. An after-school job, constant arguments with her dad, and an undefined relationship with the wonderfully annoying Georgia guy who won her heart only add to the crazy.

When tragedy collides with Sadie’s carefully re-built life, she learns that trusting in a God she can’t see is more difficult than she ever imagined.

Is starting over worth the cost?